“I think especially about the kids, who have been robbed of a hope for a better life, a future: kids being killed, wounded, mutilated and orphaned. Kids who as toys have the debris of war, who cannot smile anymore.”

Reminds me of my brother’s description of the average 5-year-old he would see in Kabul, Afghanistan in 2008. He said that you wouldn’t recognize it as a child’s face because of all the suffering the child had endured. The faces reminded him of a 40-year-old who’s had a really, really tough life. Only for these children that intense suffering has been crammed into a short five years, half of which probably wasn’t able to be remembered. But that suffering has left it’s mark.

We need to get back to that space in June when he and Presidents of Israel and Palestine gathered to pray for peace, not physically. But spiritually. 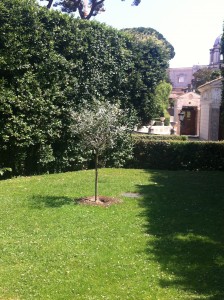 Olive tree from the Pope’s prayer gathering with the President’s of Israel and Palestine. I took this picture in mid June while at the Vatican for a conference.

Iraq. Genocide. "Never Again" Should Cue Something More Than A James Bond Movie.

The "War On Women" Is So...Yesterday