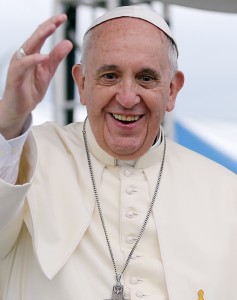 On Saturday, Pope Francis gave an address to the Association of Italian Catholic Doctors on the occasion of the organization’s 70th anniversary.

For those who have been pondering whether the Pope is still Catholic, still pro-life, etc., I recommend it. And it’s a good read regardless. In particular, his emphasis that medical ethics is not about religion or philosophy. It’s about science:

The dominant thinking sometimes suggests a “false compassion”, that which believes that it is: helpful to women to promote abortion; an act of dignity to obtain euthanasia; a scientific breakthrough to “produce” a child and to consider it to be a right rather than a gift to welcome; or to use human lives as guinea pigs presumably to save others. Instead, the compassion of the Gospel is that which accompanies in times of need, that is, the compassion of the Good Samaritan, who “sees”, “has compassion”, approaches and provides concrete help (cf. Lk 10:33). Your mission as doctors puts you in daily contact with many forms of suffering. I encourage you to take them on as “Good Samaritans”, caring in a special way for the elderly, the infirm and the disabled. Fidelity to the Gospel of life and respect for life as a gift from God sometimes require choices that are courageous and go against the current, which in particular circumstances, may become points of conscientious objection. And this fidelity entails many social consequences. We are living in a time of experimentation with life. But a bad experiment. Making children rather than accepting them as a gift, as I said. Playing with life. Be careful, because this is a sin against the Creator: against God the Creator, who created things this way. When so many times in my life as a priest I have heard objections: “But tell me, why the Church is opposed to abortion, for example? Is it a religious problem?” No, no. It is not a religious problem. “Is it a philosophical problem?” No, it is not a philosophical problem. It’s a scientific problem, because there is a human life there, and it is not lawful to take out a human life to solve a problem. “But no, modern thought…” But, listen, in ancient thought and modern thought, the word “kill” means the same thing. The same evaluation applies to euthanasia: we all know that with so many old people, in this culture of waste, there is this hidden euthanasia. But there is also the other. And this is to say to God, “No, I will accomplish the end of life, as I will.” A sin against God the Creator! Think hard about this.

Remember, he was trained as a chemist, i.e. a scientist. You can find the entire text here. The original Italian text is here.

From Ferguson - A Different Voice

CNN Reporting 11 Women Killed From A Sterilization Campaign In India