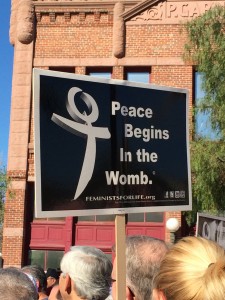 Los Angeles knows how to do a pro-life walk/rally. After oh-so-many freezing (but, of course worth it!) Marches for Life in DC and Olympia, WA, it was almost surreal to be at a pro-life gathering with warm sunshine instead of snow, rain, and whatever other chilling effects of weather that exist.

70 degrees. Sunscreen. Sunglasses. Sitting on the grass. In the sunshine. Saturday, January 17.

Aside from the spectacular weather, the Archdiocese of Los Angeles, in its first ever pro-life rally commemorating Roe, pulled together an event that – to my mind – looked a lot more like what the pro-life movement should look like. The event, OneLife LA, emphasized many aspects of “embracing the beauty and dignity of every human life.” In other words, if we say we’re pro-life, then we care about the poor, the vulnerable, the marginalized, the lonely, the homeless, and everyone. Throughout the event, the Archdiocese featured various projects that support life in so many different ways. I think this helps the movement a lot. It helps us to understand better our values and ideals, hopefully doing more hands-on work to put them into practice. And it certainly evades the tired Jane Fonda-esque criticism that pro-lifers only care about babies until they’re born and out of the womb.

The other aspect that made this event unique – yes, aside from the sunshine – was that the attendees looked representative of Los Angeles. In other words, we weren’t all white. Most urban areas are very ethnically diverse, but that seldom seems obvious when it comes to city-based pro-life events. This march looked less like suburbia had bused itself in to participate, and much more authentically LA. While it is certainly a welcome thing that people travel to participate in marches and I don’t want to discourage such participation in any way, when the local community  makes its pro-life feelings known, that’s a powerful witness…

With immigration being such a looming and divisive issue, I took a lot of comfort in seeing the Latino population represented. I don’t want to get into an immigration debate, but there are several realities to keep in mind, not least of which include the following: 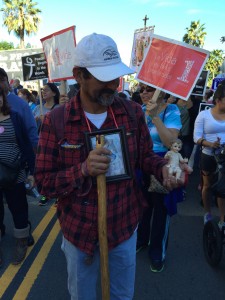 Ironic that Roe v. Wade was decided in the weeks after we celebrate the birth of God made man. (Photo – Pia de Solenni)

I like seeing our various populations/ethnic groups/socio-economic groups represented and active in society, particularly on issues that are important to them. Democracy doesn’t work when people don’t participate.

While such an event clearly took a lot of work from many, many people, including the ever faithful Knights of Columbus, I understand that the leadership came from Kathleen Domingo, the Archdiocese’s Life Coordinator and Carolina Guevara, Chief Communications Officer. Given the results, it’s hard to believe that this was their first attempt at such a major production.

After the OneLife LA walk and rally, 40 Days for Life sponsored a short conference “Save More Lives in Southern California,” where I spoke on behalf of Heartbeat International.

David Bereit, the head of 40 Days, gave a great presentation at the earlier rally. The idea of the following conference was to motivate people who want to do more in the pro-life movement. David has a very succinct way of giving context to the abortion issue in California.

The top causes of death in California each year –

Puts things in perspective, no?

All the more reason why our pro-life events need to be a representative as possible of our local communities, including urban areas.

From Ferguson - A Different Voice