Is James Foley A Martyr? 16 Points To Consider. 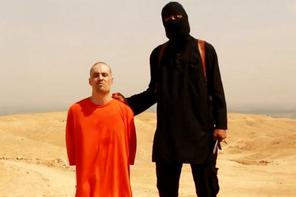 With the beheading of James Foley and the increasing reports of his Catholic faith, the word “martyr” is becoming more popular. Some would caution that we shouldn’t use the word too lightly. I agree. At the same time, I also think martyrdom is more common than we realize. Here are 16 points (5+6+5) and few more for good measure.

So who are the martyrs?

The Catechism of the Catholic Church describes martyrdom as “the supreme witness given to to the truth of the faith: it means bearing witness even unto death.” (CCC 2473)

Some things to note:

So, is James Foley a martyr?

According to his siblings, Katie and Michael, who were interviewed on the Today Show, when Pope Francis spoke with the family by telephone, he said that their brother James is a martyr:

The brother and sister also spoke in slight detail about what the Pope said to the family when he called on Thursday afternoon. Michael said that the pontiff labeled James an martyr, who sacrifice would not be forgotten.

Do I think the Pope could’ve said it? Yep. Absolutely.

And I wouldn’t be surprised if he did.

A few weeks ago, the Middle East Media Research Institute (MEMRI) put out this video of an Iraqi television host breaking down in tears as he recalled how he was seeing the witness of the Christians who are being persecuted in Iraq. I’ve verified with two native Arabic speakers that the translation is accurate.

How do people know Christians and others of good will? By their actions, by their witness. You know the tree by its fruit. The witness of these good people suffering unjust persecution moves a man of a completely different faith to breakdown in tears publicly.

I don’t know enough about James Foley’s life to know if a formal canonization process should be started. Most of us don’t know. But we do know that he bravely suffered death for who he was and who he refused to become. He witnessed his beliefs even unto death.

So, I’m okay with using the word “martyr” to describe him. In all likelihood, based on what we know so far, he was. Just to reinforce, I’m not canonizing him. But I am saying that he gave us a tremendous witness in his death and in the events that led to it. As I said above, if his death makes us more aware of the religious persecution that is happening every day, around the globe, then he’s even more of a witness.

We don’t want to cheapen the meaning of the word “martyr.” But this is real. It’s happening everywhere. It’s making extraordinary witnesses out of ordinary people. We should not cheapen their witness by ignoring the reality of their sacrifice, their martyrdom.

May we honor their memory and may they all rest in peace.

The Legion Defames A Woman. A Saint.

"When The Game Stands Tall" - It's Not About The Game.