3 Things You Can Expect From Synod 14.

Pia de Solenni
6 min read
636 views
No Comments on 3 Things You Can Expect From Synod 14.

Here are three things you can expect from the Synod – Rome is a colorful place, to say the least, and it has certainly left its stamp on the Vatican.

So what can you do in the meantime? Here are some suggestions –

Yes, there’s chaos, but this too shall pass. Ignore the alarmists. Anyone who disrupts a Christ-centered peace is doing someone else’s work, not Christ’s. Read Church history. We have always been a rather muddled mess. That’s what proves the Church is divinely instituted. No merely human institution could withstand humanity and all its foibles as long as the Church has. 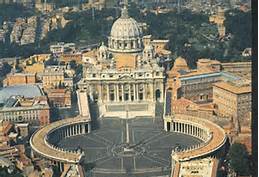 St. Peter’s, with the dome reaching towards heaven and the arms (braccie) of the piazza embracing and drawing together humanity.

Cardinal Burke - In or Out?

The Annulment Process: A Right And A Healing