UPDATED: What did the Pope say on the way back from Mexico…?

Pia de Solenni
6 min read
831 views
No Comments on UPDATED: What did the Pope say on the way back from Mexico…? 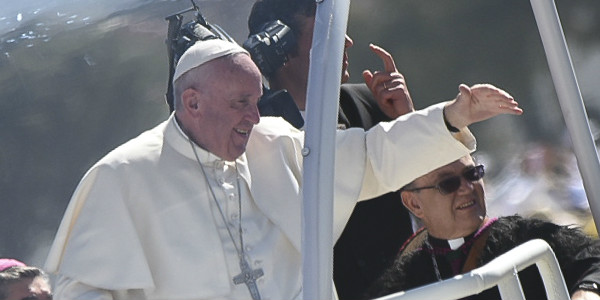 By Aleteia Image Department [CC BY 2.0 (http://creativecommons.org/licenses/by/2.0)], via Wikimedia Commons

The headlines this morning told us the following –

Many other articles carried similar headlines. I cite these three because they are all written by journalists whom I’ve known to have very high journalistic standards. All of them agree that he stated that abortion was not an option, regardless of the Zika virus. None of them offered a direct quote saying that contraception is permissible in the regions affected by Zika. Inés San Martín offers this clarification in her piece –

Catholic News Agency provided a transcript of the entire press event aboard the papal flight to Rome. It’s an unofficial English translation. Pope Francis offers this answer to Paloma García Ovejero of Cadena COPE (Spain) regarding the question of using abortion or “avoiding pregnancy” in these areas.

Abortion is not the lesser of two evils. It is a crime. It is to throw someone out in order to save another. That’s what the Mafia does. It is a crime, an absolute evil. On the ‘lesser evil,’ avoiding pregnancy, we are speaking in terms of the conflict between the fifth and sixth commandment. Paul VI, a great man, in a difficult situation in Africa, permitted nuns to use contraceptives in cases of rape. Don’t confuse the evil of avoiding pregnancy by itself, with abortion. Abortion is not a theological problem, it is a human problem, it is a medical problem. You kill one person to save another, in the best case scenario. Or to live comfortably, no? It’s against the Hippocratic oaths doctors must take. It is an evil in and of itself, but it is not a religious evil in the beginning, no, it’s a human evil. Then obviously, as with every human evil, each killing is condemned. On the other hand, avoiding pregnancy is not an absolute evil. In certain cases, as in this one, such as the one I mentioned of Blessed Paul VI, it was clear. I would also urge doctors to do their utmost to find vaccines against these two mosquitoes that carry this disease. This needs to be worked on.

Admittedly, the Pope cautions to not “confuse” and in fact seems to offer a confusing,  not-clear answer. What is clear is that the only way one can understand this to be an endorsement of contraception would be to equivocate the meaning of the term “avoiding pregnancy.” He refers to a specific example of Paul VI reportedly allowing some nuns in specific conflict ridden areas who were at high risk of being raped to use contraceptives. For what it’s worth, I’ve heard of this case many times and have yet to see the documentation on it. Regardless, it’s a very, very specific use of contraception, one in which the women in question are leading celibate lives to start with.

UPDATE: Here is the official Vatican version in Italian. Still somewhat confusing. No change in the teaching on contraception.

UPDATE: For those interested in the specifics of the case allowing contraception by Paul VI, as far as I can tell it was allowed under the teaching of Paul VI. It’s still not clear that he directly approved it. Regardless, I don’t see any problem with it other than that I think more should be done to protect nuns in these situations… But that’s just my opinion. Here’s one summary article in Italian. In English, you can get the book Ethics of Procreation and the Defense of Human Life: Contraception, Artificial Fertilization, and Abortion, by Martin Rhonheimer. You can find a preview of the section in question here.

And it seems that the Pope might also be thinking of fertility awareness (natural family planning) or simply abstinence,  in which case “avoiding pregnancy” would not be wrong in and of itself. With due respect to CNA’s work to provide a transcript, I’ll leave it to you to look up the sections on civil unions and Donald Trump. It’s easy to see why there’s confusion. At the same time, the Pope cloaks his answers in all sorts of conditions.

Here’s the lens I would offer. It’s a confusing transcript and sometimes he speaks in ways that lead different listeners to arrive at their own varied conclusions. It strikes me that he’s very Jesuitical in his thinking. By this I mean that he’s thinking of every possible scenario when asked a question…and he seems to do a lot of thinking out loud…which causes serious confusion. It creates headlines that stay emblazoned in the memory of a world which is supposed to have a short term memory. It creates work for every type of Catholic leader and teacher – clerical, religious, and lay.

But he’s not changing Church teaching. In order to do that he would have to promulgate the change in a way that is accessible to everyone, starting with the Bishops. It would also have to be clearly enunciated in an official document and it would have to be a teaching that could be changed, something like allowing girls to be altar servers. Interviews on a plane hardly fit the description.

Yes, these statements cause headaches for some and celebrations for others. But faithful Catholics and others of good will need to remember to not take things at face value when they’re first reported. It’s always important to do one’s research.

I look forward to the official Vatican transcript and the official English translation. It will be helpful to compare the two.

In the meantime, I can see why the journalists reported as they did. They acknowledged the confusion while at the same time did not offer any direct quotes. That in itself is a huge help to a careful reader looking to understand a situation. It also points to the fact that a solid argument could be made that the Pope needs to be more precise in his statements.

Nevertheless, I look back at our first Pope, St. Peter. I see what he’s recorded as saying in the New Testament. So very often, he’s wrong. But he was still the Pope and carried out his office in a saintly way even if his soundbites weren’t so good.

6 Things You Need To Know About The Zika Virus