Evangelization – Two Birds With One Stone

Editors’ Note: This article is part of the Public Square 2014 Summer Series: Conversations on Religious Trends. Read other perspectives from the Patheos community here. In 2006, I was on…

Editors’ Note: This article is part of the Public Square 2014 Summer Series: Conversations on Religious Trends. Read other perspectives from the Patheos community here.

In 2006, I was on Chris Matthews’ show “Hardball” to discuss the Da Vinci Code movie, released the evening of the episode we were doing in New York. Matthews, a Catholic himself, asked me why so many Catholics had read the book if, as I claimed, it was factually incorrect and not an accurate representation of the faith. I didn’t have to search for an answer. “Because they are uncatechized. They haven’t been taught their faith.” To top it off, The Da Vinci Code was a quick read and an easy way to sit back and laugh at one’s faith…the faith which is known less than the details of a work of fiction…

This comes home to me again and again as I’ve participated in all sorts of venues on the topic of the new evangelization. Don’t get me wrong, I fully support the new evangelization. However, experience continues to convince me that the starting point should likely be within our own Church rather than towards those not already sitting in our pews.

The demonstrated lack of unity among Catholics further illustrates the need for education and evangelization in our own Church first. Most of our divisions come from a lack of information and understanding. Sadly, it takes energy away from the mission that we have all received through baptism, namely to help spread the faith, mostly in the witness of our lives. In many ways, we’ve become Protestant in our thinking. Whatever our understanding of the faith, we tend to cling to the things that mean the most to us and we create our own faith out of it. Take your pick: immigration, pro-life, eugenics, social justice, marriage, birth control, liturgy, music, clericalism, and countless other topics.

Consider, for example, the reaction to Pope Francis’ answer to the question of homosexuality on the plane back from World Youth Day. You know the one. When asked about the alleged “gay lobby” in the Vatican, he answered, with regard to the homosexual inclination, “Who am I to judge them if they’re seeking the Lord in good faith?”

People in the Church (and in the media) advocating for acceptance of the gay lifestyle, took his quote to mean, “It’s all good. Do whatever you want.”

Those more suspect of the Pope took to their own media and complained that the Pope had misspoken, that he was a “liberal” (horror of horrors), after all.

Neither group took him at his word. Instead they injected their own thoughts and emotions. That’s fine, but that’s not the way the Catholic Church works. As Catholics we profess the one, the holy Catholic faith. We submit ourselves in obedience to the teachings of the Church, even if we don’t understand them. I know, words like “obedience” and “submit” only seem to have a context in a Fifty Shades of Grey type of novel, but truly there are far more edifying concepts of these words.

Secondly, we all have our defects and, as long as we are “seeking the Lord in good faith”, really, who has a right to judge? Of the many Scripture conversations about judging, perhaps Romans 14, 13 would be the most apt for this situation:

Then let us no more pass judgment on one another, but rather decide never to put a stumbling block or hindrance in the way of a brother.

The Pope was saying first that there’s nothing in the orientation itself for which he should judge a person who has the orientation. But there’s a second aspect, the one which brings to mind the above reference, why unnecessarily make life even more difficult for those who already have a heavy cross to bear?

But commentators on either side made assumptions about what the Pope said. That’s natural, in part. Nevertheless, when it’s Catholics who begin to criticize in this manner the only thing that they demonstrate is an ignorance of their own faith.

There have been many such occasions, feel free to list your favorite in the com-boxes below.

The point remains that in order for the new evangelization to succeed, there has to be a serious and comprehensive education of already professed Catholics. We have countless polls that demonstrate differences in “opinion” about fundamental Catholic teachings. To my mind, these polls should not be used to lambast one group of people or another. They should be taken as an indication of the work of evangelization that needs to start first in our churches.

Remember, too, that many people who have fallen away from the Catholic Church or have lost the interest they may have had, frequently do so because of a personal encounter with a Catholic who acted poorly, not infrequently about something of which they understood very little.

If the members of our own Church are well catechized, think of how much easier evangelization towards those outside of the Church will be. And if we actually took the time to understand each other, that whole unity thing might start working a bit better, too. Growing in understanding and unity – two birds with the one stone of evangelization. 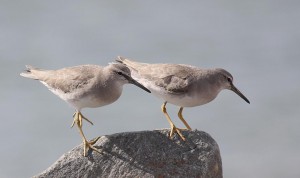 Related to this theme, you might also take a look at a post I wrote a few months ago: 2 Essential Resolutions For Lent.

END_OF_DOCUMENT_TOKEN_TO_BE_REPLACED
No Comments on Evangelization – Two Birds With One Stone