Yesterday, Catholic League put out a press release with statements from CL’s president, Bill Donohue commenting on “Walmart’s Catholic Problem.” “Fat Girl Costumes” sold by Walmart were the subject of… 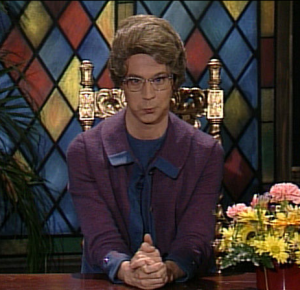 Dana Carvey as “The Church Lady.” Sorry, but she sort of fits the hype of the Walmart story. Unless there’s more info that hasn’t been documented publicly. Source: Google Images, license for reuse.

“Fat Girl Costumes” sold by Walmart were the subject of a deep apology and a pledge to rid the store’s inventory of such demeaning garb. Yesterday, when Catholics who are on our news release list complained to Walmart about three offensive Catholic costumes—a Virgin Mary with blood dripping from her eyes, a nun outfit with a skeleton head, and a costume that mocks the confessional—they got a different response.
“We apologize if we offended you. Because we have multiple buyers of customers, we try to provide them with plenty of options. However, we have documented your concern in order to improve our inventory at Walmart.com and in stores.”

I was so bothered by the story that I opted to not make a purchase at a Walmart yesterday. But then I realized that I really didn’t know much about the story; so I decided to return to the Walmart and see what I could find. In speaking with the manager, I got a little more info. Apparently, the Walmart site was hacked and that’s how the “Fat Girl Costumes” got there. This manager had seen none of the offending costumes (they’ve been sold out of costumes for a while now) and, given what I’ve consistently seen in this Walmart, I believed him. It’s family friendly, lots of Christian materials. 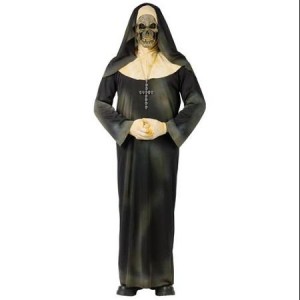 I went to the Walmart website. Yes, there’s the offending nun costume.

But no Virgin Mary with bleeding eyes or “a costume that mocks the confessional,” whatever that may be.

There are Virgin Mary costumes, priest costumes, and rabbi costumes. (No imam costumes, for what it’s worth.)

But in all fairness, these costumes could be purchased and used without being offensive. Heck, lots of Catholics and other Christians encourage alternative Halloween celebrations, e.g. saints, harvest costumes, etc.

So here’s my point. Catholic League may be completely right in their statement, but it’s difficult to verify. They don’t have the offending costumes pictured on their website, much less identified as Walmart merchandise. It’s unclear what one of the offending costumes might even look like. And there’s a bit of a back story, which sounds legitimate, about the “Fat Girl Costumes.”

I think we need to be very careful as Catholic experts and commentators when we run with a story. Is it accurate? Do we know enough? The commentary surrounding the recent Synod was evidence of more imprecision and confusion.

As Archbishop Chaput recently reminded us, confusion is of the devil. Our job is not to add to the confusion or to create it, but to be light that dispels darkness and confusion.

Catholic League, please shed some light on your story. I’m happy to post anything that you can document. Right now, it’s just confusing.

By now most people have heard about Hilary Rosen’s terrible choice of words in reference to Ann Romney on CNN Wednesday night. Rosen is a White House adviser and a…

By now most people have heard about Hilary Rosen’s terrible choice of words in reference to Ann Romney on CNN Wednesday night. Rosen is a White House adviser and a PR consultant which makes her choice of words all the more impactful.

If you didn’t, here’s the clip.

CNN has a complete transcript here.

What you have is Mitt Romney running around the country saying, well, you know, my wife tells me that what women really care about are economic issues. And when I listen to my wife, that’s what I’m hearing.

Guess what, his wife has actually never worked a day in her life. She’s never really dealt with the kinds of economic issues that a majority of the women in this country are facing in terms of how do we feed our kids, how do we send them to school and how do we — why do we worry about their future?

The statement was pretty bad, though she may indeed have not meant to come across the way that she did. But many people understood her to be attacking Ann Romney’s decision to be a stay at home mom and suggesting that is wasn’t real work. On the contrary, raising five children is more work than many many people are willing to do, as evidenced by widespread intentionally low birthrates.

Add to this that Ann Romney comes across as a lovely person and that she’s battled cancer and MS and you’ve got a major PR crisis.

But it gets better. (-Depends of course on what you mean by “better.”) The Catholic League responded with the following tweet:

Lesbian Dem Hilary Rosen tells Ann Romney she never worked a day in her life. Unlike Rosen, who had to adopt kids, Ann raised 5 of her own.

Ouch. Not only is this not Catholic in any way, shape, or form. It’s simply unnecessary. With whom Rosen chooses to share her bed has nothing to do with her statement on Ann Romney and her experience with economics. Additionally, are we now suggesting that there’s something unCatholic about adoption? If so, then we’re going to have to revisit the core of our theology which is divine filiation…which is to say a type of adoption.

The Catholic League has done a good job defending the Catholic Church on many issues. But the type of response exemplified in the above tweet makes the same fundamental communications error that Rosen made. It’s completely off message and ad hominem (ad mulierem, to be precise).

It also sounds hateful/spiteful, not unlike Rosen’s comments. And that’s another sign of bad communications strategy. When you start spewing negative emotion, any constructive (even if critical) message is lost.

Some other thoughts on Rosen’s remarks –

1. Why does she assume that someone without professional experience can’t have valid opinions about economics? Plenty of women who are not economists and financial advisers do a fine job of managing family finances. And plenty of professionals (economists and others) have been terribly wrong about the economy.

2. I continue to meet interesting people who have a depth of knowledge beyond their professional or day-to-day occupations. Some of the smartest people I’ve known never went to college. It’s the height of just about every -ism to judge someone’s intellectual understanding based on a few outward assumptions about them.

3. As I wrote/tweeted yesterday, “Will someone with 5 small children at home please offer Hilary Rosen the opportunity to babysit for 24 hours? And let her pay your bills etc.”

END_OF_DOCUMENT_TOKEN_TO_BE_REPLACED
No Comments on The Catholic League: Making The Latest Mommy War Worse